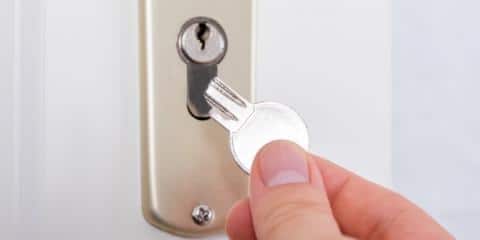 Putting a key in the lock of the front door to unlock or lock it Is something that we do pretty much every day – even in these Covid pandemic times – so much so that we don’t even give a second thought to it. But what happens if you put the key in the lock and it doesn’t come out again?

Getting your key stuck in the lock in your door is a common problem that locksmiths encounter. It is also a big inconvenience and something that has to be sorted out as soon as possible. Whatever the reason the key is stuck in the door, you need to get it out to ensure your door is secure again.

Read on for our tips on what to do if your key gets stuck in the door.

Why keys get stuck in the door

There are several reasons why keys can get stuck or jammed in a door. Firstly, and most simply, the key can snap off in the lock, leaving you holding the end of it and the rest stuck in the barrel. Other reasons include that the key is worn or badly cut, the lock itself has broken or the wrong key has been used by mistake.

If the key won’t turn in the lock, then it is likely to be because the wrong key has been used – it is surprising how often this happens, as often keys look alike. Another common reason is that it is badly worn or broken: keys are hardwearing things but they aren’t indestructible and after years of use and being bumped around in pockets or handbags, they do wear and can break.

However, if the stuck key turns a little in the lock, then it is more likely that there is a problem with the lock itself.

What not to do

If your key has got stuck in a lock, whether the door is locked or unlocked, there are certain things you shouldn’t do. Firstly, don’t try to force the key out of the lock as that could break the key or damage the lock. Likewise, don’t try to take the lock apart yourself – this could just cause more damage and mean that when you do call in a locksmith, the job takes longer to do and costs you more.

Also, if your key has broken in the lock don’t be tempted to try and glue the pieces back together. Firstly, this won’t work as glue isn’t strong enough and secondly you could end up getting glue in the lock and this could mean you end up having to get the lock replaced as well.

Instead you should call in a professional locksmith such as Inta-lock Locksmiths in Leicester to fix the problem. Locksmiths have been trained to deal with all types and brands of locks whether they are uPVC locks, mortice locks or safe locks – new or old – and can often fix the problem in a matter of minutes.

Key stuck in a uPVC door

A common problem that locksmiths see is a key getting stuck in a uPVC door lock. One of the most common causes of this is when the cylinder cam slips and gets stuck behind the latch release mechanism, meaning it cannot move. However, the good thing about common problems is that they are easily diagnosed and fixed.

How are broken keys removed from a lock?

Locksmiths have several techniques they commonly use to extract a broken key from a lock. For instance, they will carry a special key extraction tool, which is unique to the locksmith industry and not commercially available. Other methods may include removing the cylinder of the lock and, in some cases, replacing the cylinder.

What the locksmith shouldn’t do is attempt to drill the lock to remove a snapped key. If they suggest that, then question their motives – as described above, it shouldn’t be too difficult to remove the key and destroying the lock is an unnecessarily expensive option.

The locksmith will also be able to cut you a new key as well to replace the broken one. While it is possible to do it from the broken key, it is easier to make a duplicate if you have an intact spare key.

How long will it take to repair?

As a guideline, for a routine case, then a skilled locksmith can usually have the problem solved in under an hour.

How much does it cost?

Removing a key from a lock – whether it is snapped, stuck or the lock has broken – is not one of the costliest locksmith jobs and usually costs under £100 to sort out, depending on how complicated the job is, the time it takes to complete and how far they have to travel to get to you.

It’s always worth asking for a quote upfront from a locksmith before you decide to engage them. At Inta-lock Locksmiths, we are always happy to do this for customers.

There are certain things you can do to help reduce the likelihood of getting a key stuck in or snapping in a lock too. Regularly ensuring your lock is lubricated, such as with using sprays such as WD-40, and ensuring it is kept clean can help to ensure it works smoothly

However, if you live in Leicester or the Leicestershire area and you have a key stuck in a lock, then give Inta-lock Locksmiths a call. Our trained professionals can be out to your location within an hour in an emergency and our call-out rates are competitive with any other locksmith in Leicester. Give our friendly team a call on 0116 4422084 or email enquiries@inta-lock.co.uk to find out more.